You are here: Home / NH: Transportation 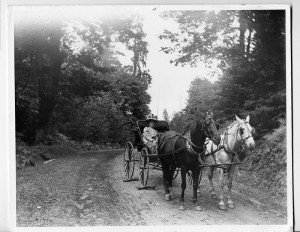 “The paramount problem in the development of any suburban property is that of transportation.”
– 1910 Glenmorrie advertising brochure

A handful of original settlers came to Oswego in the 1850s by sailing around the horn, a voyage that took seven weeks. Others come overland by wagons, on foot, and by horseback. The settlement of Oswego took shape. By 1884, C. T. Dickinson recalled, “It took two hours to go the six miles to Portland. The road was a continuous mud hole in winter, and a foot deep with dust in summer.”

Stagecoaches ran between Oswego and Portland in the late 1860s. During the same period passenger steamboats threw down gangplanks at two river landings in Oswego. Iron ore discoveries sparked the development of the iron industry. In 1865 the furnace construction brought an influx of workers and the town took on the characteristics of a company town.

After the demise of the iron industry, the principals of the Oregon Iron & Steel Company began to realize the real estate potential of their land holdings. The firm Atchison & Allen was the first to market homesites. After a decade, the Ladd Estate Company took over the marketing responsibilities. Paul C. Murphy joined the Ladd Estate Company in 1922 and he brought a broader, transformative vision. From 1923 through the 1930s, Murphy promoted districts of magnificent, architect-designed homes along with resort-like amenities. In 1914 developments were spurred by the arrival of the Red Electric commuter trains that brought an influx of people to Oswego and the Lake Grove area. By 1928 a Southern Pacific advertisement simultaneously touted their new “Silver Gray” bus service and listed discontinued Red Electric trains. The last Red Electric train ran in 1929, but the new mobility of the automobile and better roads brought even more people to Oswego. In the 1920s Murphy’s Auto Camp on State Street rented cottages for $1.00 to $2.00 per night.

As the twentieth century progressed, people no longer needed to be convinced of the attractions of the area and Oswego grew exponentially. The most transformative annexation occurred in 1959 when part of Lake Grove joined Oswego. This brought the entire lake within the city boundaries. The name “Oswego” that had belonged to the city for over one hundred years was officially changed to “Lake Oswego” in 1960 in honor of this annexation. The stage was set for another major addition to the city with the 1968 annexation of Mountain Park that eventually doubled the population. Development of the Westlake area connected Lake Oswego to Oregon’s Interstate 5 and the city was transformed once again.

In the twenty-first century, Lake Oswego has experienced growth and many changes. Judging from our past we will remain a community of distinctive neighborhoods and future transportation options will continue to shape our city.