You are here: Home / Board and Advisors 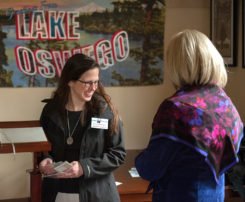 Rachel Verdick, Society Board President invites a visitor to sign the guest book.

Marylou founded the Society in 2011. The triple bottom line benefits of preservation—environmental, economic, and social—are at the heart of the Society’s mission. She also researches, writes, and presents information on Lake Oswego’s history. She received the City of Lake Oswego’s Historic Preservation Merit Award as well as the City’s Unsung Hero Award plus the Excellence in Community Service Award from the Daughters of the American Revolution for her work in preserving and showcasing Lake Oswego’s unique history. She founded the Lake Oswego Historic Home Tour in 2007, but she has not been associated with it since 2009. Marylou is also the author of the book Lake Oswego Vignettes: Illiterate Cows to College-Educated Cabbage which was published by The History Press in March 2012.

Rachel Verdick, an Oregon native, moved to Lake Oswego in 2001 with her husband Jonathan Puskas. She earned her B.A. in Sociology from Saint Mary’s College, Notre Dame, IN and an MBA from the University of Notre Dame. After designing a second story addition to her own home, Rachel decided to exit her corporate management career to pursue her dream of architecture. She enrolled in the Architectural Design and Drafting program at Portland Community College where she completed her AAS in Architectural Design in 2010. Immediately thereafter, she opened Verdick Residential Designs. Currently, Rachel earned her Master’s Degree in Historic Preservation from Boston Architectural College. She also serves on the City of Lake Oswego Historic Resources Advisory Board and Lake Oswego Arts Council Gallery Without Walls Selection Committee.

Born in western New York, Jon’s family moved to Oregon when he was in the second grade. Jon grew up in NW Portland and graduated from Lincoln High School. While traveling the country Jon discovered his passion for architecture and design and earned an architecture degree from Portland State University.  Jon began working in Lake Oswego after graduation and moved here in 2005 with his husband Michael. Together they bought and remodeled their first house in Lake Oswego. Four houses later, they now live in the Old Town neighborhood with their daughter. Jon owns a local Design-Build company and is a licensed real estate broker. He previously served on the Lake Oswego City Council and as Chair of the Lake Oswego Planning Commission. He is currently President of the Willamette Falls Heritage Area Coalition.

Susan lived in Lake Oswego for 27 years and is currently a Portland resident. She has a degree in Computer Science from Linfield College and worked with Intel, Wang Laboratories and other high technology companies before ultimately pursuing her real love, real estate.  Susan spent her youth in Chicago where her passion for architecture was sparked by touring buildings and homes designed by great architects such as Frank Lloyd Wright and Mies Van der Rohe.  Susan and her husband enjoy restoring homes, a Marjorie Wintermute in Lake Oswego and currently a John Storrs in Portland.  She has also held advisory or committee positions with the John Storrs Home Tour with RESTORE OR, Portland Community College, Three Rivers Wine and Land event, Oregon College of Art and Craft auctions, Oswego Heritage Council home tours, past president and board member of the Lake Oswego School District Foundation, past board member for Willamette Women Democrats and past board chair for Saturday Academy.

In 2006 Denise and her partner Drew bought a mostly intact 1907 Craftsman Foursquare in NE Portland and were almost immediately immersed in the world of historic preservation through the Architectural Heritage Center. Since then Denise has volunteered at the AHC, worked on the initial phases of their library project through a grant, and spent six and half years as the Digital Media Specialist and Operations Administrator for Restore Oregon, the statewide historic preservation organization. While at Restore Oregon she was responsible for a large part of running of the annual Mid-Century Modern home tour and three Rummer tours. In 2016 She and Drew found their own mid-century home in Lake Oswego, and sold every Arts & Crafts item they owned. They’re loving their new lifestyle and their new community.

Joan has lived in Lake Oswego since 1978 and is a graduate of Lewis and Clark College. During her professional career, Joan worked for Congressman and then Senator Ron Wyden running both his political and congressional offices. As a volunteer, Joan devotes her time to the issues and people she believes in. She served on the Board of the National Friends of Public Broadcasting and has been involved in numerous campaigns in Lake Oswego. She is thrilled to combine her interest in historic preservation with community activism as a member of the Board of the Lake Oswego Preservation Society.

Craig has lived in Lake Oswego since 1991, He holds a BA in Political Science from Whitman College in Walla Walla, Washington and a Master&#39;s Degree in Public Administration from American University in Washington DC. He had a 30 year career in state and local government finance and finished his career as City Manager of Tigard Oregon. Along the way, he served as a Lake Oswego City Councilor and a member of the Board of Directors of the Three Rivers Land Conservancy. Since retiring from Tigard in 2011, he has served on the Board of Directors for TriMet, and is currently a member of the Board of Directors for Ride Connection, a not-for-profit organization providing and promoting transit services to the elderly, disabled, and low income citizens of the TriMet service area.

Emogene has lived in Lake Oswego for 32 years. During this time she served on Lake Oswego City Council and the task forces for Affordable Housing and Infill Development. She also served on the planning committee for the first two Lake Oswego Historic Home Tours. Her professional career has been that of a realtor in Lake Oswego for the past 26 years. Prior to moving to Lake Oswego Emogene and her husband were founders of Save Old Steilacoom. SOS was successful in preserving much of Steilacoom, the first incorporated town in Washington, and placing it on the National Register of Historic Places.

Corinna Campbell-Sack is a graphic artist who specializes in book, exhibit, and interpretative panel design. Her experience includes numerous books designed for the University of Chicago Press, the Oregon Historical Society and the University of Washington Press. She also designed two books for the Lake Oswego Public Library: The Diary of Will Pomeroy and the reissue of the oral history collection In Their Own Words. She also designed graphics for both the Portland Art Museum and the Seattle Art Museum for almost a decade. Among the exhibits Corinna has designed are Lost Landmarks: The Fate of Historic Homes in Lake Oswego, Oswego’s Iron Industry, and Building Blocks: A History of Lake Oswego Neighborhoods. Corinna designed the interpretative panels for both the Oswego Iron Furnace and the Oswego Iron Heritage Trail. She was awarded the City of Lake Oswego’s Historic Preservation Merit Award for her work.

Pam has lived in Lake Oswego for almost 40 years. Now retired, she worked for Clackamas County for 32 years, predominantly in the field of historic preservation. As a Senior Planner, she managed historic resource survey projects and staffed the Historic Review Board. For the last five years, Pam has been spearheading a project to rehabilitate and research the origins of a very old highly crafted hewn log building in Molalla. She currently serves on the board of Portland’s Architectural Heritage Center/Bosco Mulligan Foundation, focusing on educational programs. Pam believes that community education is the key to preserving our treasured historic resources. With shared knowledge they will be embraced as an essential part of our community landscape. Thus, they may endure for the benefit of future generations.

Nancy has been a Lake Oswego resident for 46 years. She has been employed by the Lake Oswego Chamber of Commerce, the Lakewood Center for the Arts, and the Oswego Heritage Council. Nancy is currently President of the Oswego Pioneer Cemetery. She hopes to continue to volunteer in ways that follow in the footsteps of her parents, Bill and Buzz Headlee, who gave much of their time and energy to make Lake Oswego a better place to live. Nancy believes in the importance of our past and hopes to help others realize that it was our forefathers that helped us get to where we are today. Preserving some of the past reminds us of the courage and sacrifices that those who came before us made to enrich this community.

Susanna Kuo grew up in Lake Oswego and graduated from Lewis and Clark College. She holds a Ph.D. from Indiana University in English literature and Folklore. Her interest in traditional crafts and industrial heritage has led to a variety of experiences from an apprenticeship in a Japanese crafts guild to work as a curatorial assistant in the Portland Art Museum. Her book Carved Paper is the first comprehensive work in English on the history of Japanese stencil dyeing. Her interest in Oregon history began in 1999 when she joined the board of the Oswego Heritage Council. She has written more than thirty interpretive signs for historic sites in Lake Oswego, including the Oswego Iron Heritage Trail. For her efforts to preserve the Oswego iron furnace, she received the City’s Historic Preservation Merit Award.

Bridget Smith moved to Lake Oswego from Colorado in 2011. A communications specialist, she served as director of marketing for The Bank of Oswego for six years. In this capacity, Bridget worked to provide philanthropic assistance to several local organizations in support of their mission. One notable project was the grassroots effort to preserve a mid-century modern home in Lake Oswego, designed by the famed architect Pietro Belluschi. Today the Belluschi Pavilion is repurposed as a center for art and education at Marylhurst University.

The built architecture of Lake Oswego especially speaks to Bridget. A native of Illinois, she acquired a deep appreciation of homes designed by architects such as Frank Lloyd Wright. When introduced to the Society Founder and President, Marylou Colver, she immediately sensed a connection. Impressed by the Society, its commitment to accurately sharing the history of Lake Oswego, and its strong leadership, Bridget took an interest in helping to promote its mission. A respectful partnership was formed with the Bank which helped to provide sponsorship and in-kind assistance for the Society’s many endeavors. Additionally, Bridget volunteered as a judge for the high school History Essay contests, assisted with the grand opening of the Iron Workers Cottage and with the recent Oregon Iron Jubilee celebration.

Ms. Smith was co-owner of a company specializing in renovation, remodeling and new home construction along the Front Range of Colorado for over 30 years. In addition, she holds a Master’s of Arts in Communication Studies and worked in higher education, non-profits and the private sector in Wisconsin, Colorado and Oregon. Bridget is a volunteer for the Friends of the Lake Oswego Library’s BOOKtique. An avid reader, she is learning the history of Oregon while exploring and enjoying the beauty of the Pacific Northwest.

Board meetings are generally held on the third Thursday of the month from 4:00 to 6:00, but may be rescheduled to accommodate events and board members. Meetings are generally held at the Iron Workers Museum at 40 Wilbur Street. The Board does not meet in July, August, or December. An extensive Board Member and Organizational Handbook clearly outlines the Board Member expectations along with pertinent information about the organization. The Society carries Directors and Officers liability insurance to protect volunteer board members.